The Power of Linear Programming

I love learning about computer science, lately I’ve been studying about graph theory, I even took an online course about this topic, I try to understand every concept even if it takes me longer, and I have a lemma: “If you can’t code it, you haven’t understood it”. I think this phrase is another way of saying the famous Einstein quote: “If you can't explain it simply, you don't understand it well enough”. After all, programming is explaining to a machine precisely how to proceed to solve a problem.

Recently I read about the Maximum Network Flow Problem, which goal is to find the maximum flow rate for a certain network. Imagine a network of pipes symbolized as a weighted graph, with a source S and a sink T (see graph below) the problem can be translated as: What is the maximum flow of water that I can put in S without the pipes breaking? There are many applications where we can use this problem (bipartite matching problem, baseball elimination, airline scheduling, and many more).

The solution for this example graph is 21, it means you can’t put in S more than 21 units of flow without “breaking” pipes. Usually there isn’t a unique graph setup to support that amount of flow, the following is one of them. As can be seen, the sum of the edge weights from S is 18 + 3 = 21.

The first approach I took to understand (implement on code) and resolve this problem was Ford–Fulkerson algorithm, I had to read many articles and watch lots of videos to achieve it. The process was a bit frustrating because there where many new concepts to learn, as for example residual graphs, augmenting paths… it was all worthy and a great experience. But then… while I was doing more research about this problem, a new mysterious concept appeared… Linear Programming (LP)! At first I thought was simply another way to solve the problem, but then I noticed the beauty and the power of this technique. With this way I was able to model and solve same problem much faster than with the previous algorithm.

But the power of linear programming is far beyond solving this particular problem. As long as you can model your problem in the way this technique needs, there is a great chance you can use it to solve it. Some examples where LP can be used are finding minimum cost perfect matching, optimal assignments, shortest path… or even solving a sudoku!.

The purpose of this article is to show this, using as example the max network problem. First I will explain the Ford-Fulkerson algorithm implementation, then I’m going to solve the same problem using Linear Programming. In order to show different LP libraries we’ll solve it using Python (pulp library), and cSharp (or-tools).

I’m not going to explain in detail how this algorithm works, but I want to give some intuition about it and then compare its complexity to the LP problem modeling approach.

The input for the Ford-Fulkerson algorithm is a network capacities graph flow as shown above. Then we follow this steps:

The following images show this process for our example.

Next I show my code implementation of Ford-Fulkerson algorithm, probably can be improved in many ways, but It has all the steps mentioned before. Here I summarize briefly the code:

You can find this code in the following Gist.

In a non formal way, Linear Programming is a way to find the maximum or the minimum value of a function (cost function - which has to be linear), given a set of constraints (which also had to be linear).

Maybe you will be thinking LP isn’t a powerful tool as I said after seeing this basic example, but believe me, this tool shines because of its model simplicity. You only need a linear cost functions and constraints, but they can be far more complex than this basic example. Furthermore, you can add the constraint that variables should be integers (ILP), in fact we will use this to solve the previous Maximum Network Flow problem.

In order to use LP to solve Max Network Flow we only need to model it as LP requires. As long as we can express the variables, the cost function to maximize, and the constraints (in a linear way), LP will do the job for us! 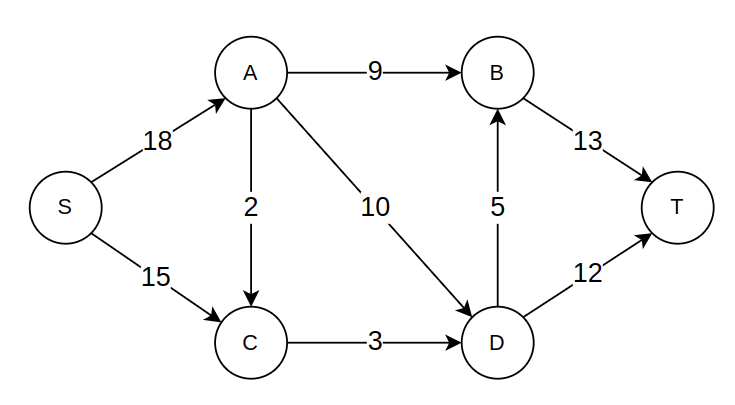 Intuitively is easy to find that our variables should be the final weights of flow for each graph edge. Then, our variables can be named as follows:

We want to find the maximum of this value.

¿Which will be our constraints? Our intuition can lead us easily to them:

And… that’s it! This is all we need to solve the problem using LP! See how easy was to model the problem using LP compared with previous method! Of course, Ford-Fulkerson algorithm has a lot of value and it allow us to understand more about how to find a solution, but LP is like a black box that does the job for us.

PuLP is a LP Python library with a very good documentation, full of examples.

Here we use another LP library called OR-Tools to solve our sample problem with c# language.